We developed and made available three types of datasets: population grids, racial grids, and racial diversity classification grids. Our data are available for each county and for 363 metropolitan areas for 1990, 2000, and 2010 as multi-year comparable datasets (called “myc”). For 2010 we also made available additional datasets that used more detailed ancillary information but cannot be used for change analysis.

WHAT IS IN THE ZIP ARCHIVE?

ARCHIVE NAME
The name of each zip archive contains 2-letters, state code, and county name. For example, oh_hamilton.zip indicates Hamilton county in the state of Ohio.

Archives that include only part of data are:

DATA AND METHODS
Demographic grids have been calculated from census blocks using the dasymetric modeling technique. 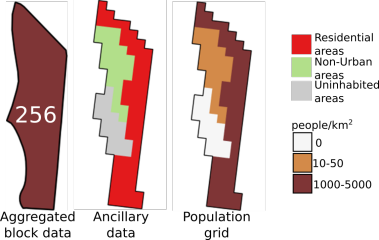 RACIAL DIVERSITY CLASSIFICATION GRIDS
Racial diversity map shows the spatial character of racial diversity across the U.S. We use our population/race hi-res grids to prepare a three-dimensional classification of grid cells based on: